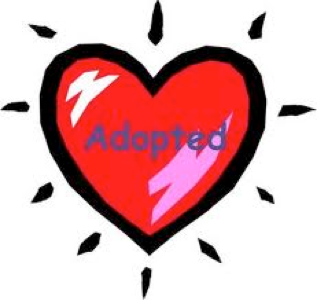 Ok, I have to set the record straight right off the bat; I was not adopted.  I wanted to be, sometimes could not believe that my family was really mine!  We had a family member who was adopted and I think I saw how special he was to everyone and wanted to get my parents to admit to my adoption. “Hey, I’m special too!”

I received my name from my parents, because when Mom was about ready to deliver me, she and Dad had gone to one of those beach movies.  Do you remember them?  Everyone was happy and dancing around in those one piece swimsuits that came down mid-thigh..  There were surfboards everywhere and perfect waves, in the water and in their hair?  Luanna Patton was one of the actresses, so I became Luanna.

When I was little I told my classmates the story and they teased me and asked me if John Wayne was my father…I wished!, but in fairness I had told them that the end of a rainbow had ended up in our basement, where I found a pot of gold….so maybe my imagination was a little active..

I remember telling my Mom that I wanted to see my birth certificate, so she could prove to me that they were my parents.  She was not happy.  I found the numbers and opened the safe myself.  I was so excited that I was finally going to know the truth!  I snuck into their room, opened the closet door and hunched down.  Three to the right for the first number…two to the left for the second number and one back to the right for the last number, I heard the satisfying click and opened the door.  I opened one of the little drawers and there they were..  I sorted through, found mine and waalaa!  Shoot!  I think I was not saying shit then, or the f word, because I definitely would have said something stronger than shoot.  My dreams were dashed. My parents were my parents…  At least my mother was my mother.

When I became older, and thought I understood sex, I started hoping that she had an affair with someone from the mail route.  Mom regularly took mail down to Mandaree, which was the deeper part of the Mandan, Hidatsa, Arikara Indian reservation.  If I went with and saw her visit with a customer, I would wonder, “Is that him, is that my real father?”  I, of course, only considered the good looking ones as serious contenders.  My thoughts were refueled when I read about Lewis and Clark talking about the Hidatsa women’s pot bellies.  Now I at least had proof that I was Hidatsa.  That was about the time I asked my grandma, if there was a chance that there had been an indiscretion in the family, and she glowered….( I have a good friend that I discussed this with that said it was more likely our diet, from poverty, not nearly as cool of a reason.)

Our families, are our families..  I have no fantasy about different parentage now.  The more I talk and listen, I have found there are no perfect families.  Mistakes are made, hopefully are forgiven, and we do the best with what and who we have.

To laugh often and much; To win the respect of intelligent people and the affection of children; To earn the appreciation of honest critics and to endure the betrayal of false friends; To appreciate beauty; To find the best in others; To leave the world a bit better by a healthy child, a garden patch or a redeemed social condition; To know even one life has breathed easier because you have lived. This is to have succeeded.
%d bloggers like this: